No Barbie, but Lots of Good, Local Food

Len and I went to Australia in October. It was an amazing, though far too short, trip. And the food was fantastic.

The first day in, we searched out a restaurant that had been reviewed in a magazine article about Sydney's great eateries just before we left. It was literally down the street from where we stayed. It is called Cafe Nice and it is on the second floor of the building. If you don't look up, you'll miss it. We watched some buskers underneath the elevated train between us and the Harbor from our window seats. It was the only rainy weather of the trip.

The salad nicoise was recommended and it lived up to its reputation. That was our first experience of sticker shock--the minimum wage is $15 an hour, including for restaurants. Tipping is truly optional (although a line does show up on a credit card receipt.) Once you factor in the living wage, you realize this is a much better way to do things than in the U.S. and it turns out that breakfast and lunch may be more than you expect to pay in the U.S., but a nice dinner at a good restaurant isn't much different than here. When I think of my niece struggling to make ends meet between acting gigs, I think Australia has a better approach.

Our first night there, foolishly because of the travel and time differentials, we decided to take a dinner cruise around the harbor. We had a lovely time, but I was almost falling asleep on our table before it ended! 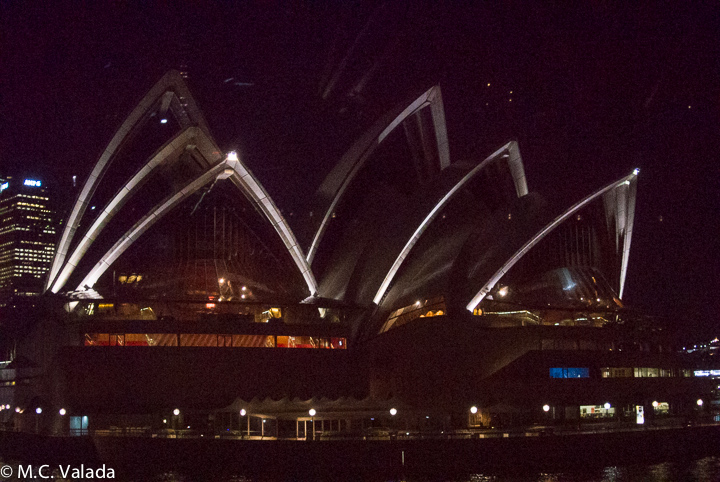 The view of the Sydney Opera House from our dinner boat.

We had several meals, besides breakfast, at our hotel, mostly because we were too tired to go out anywhere else. It was actually a pretty good choice for dinner. 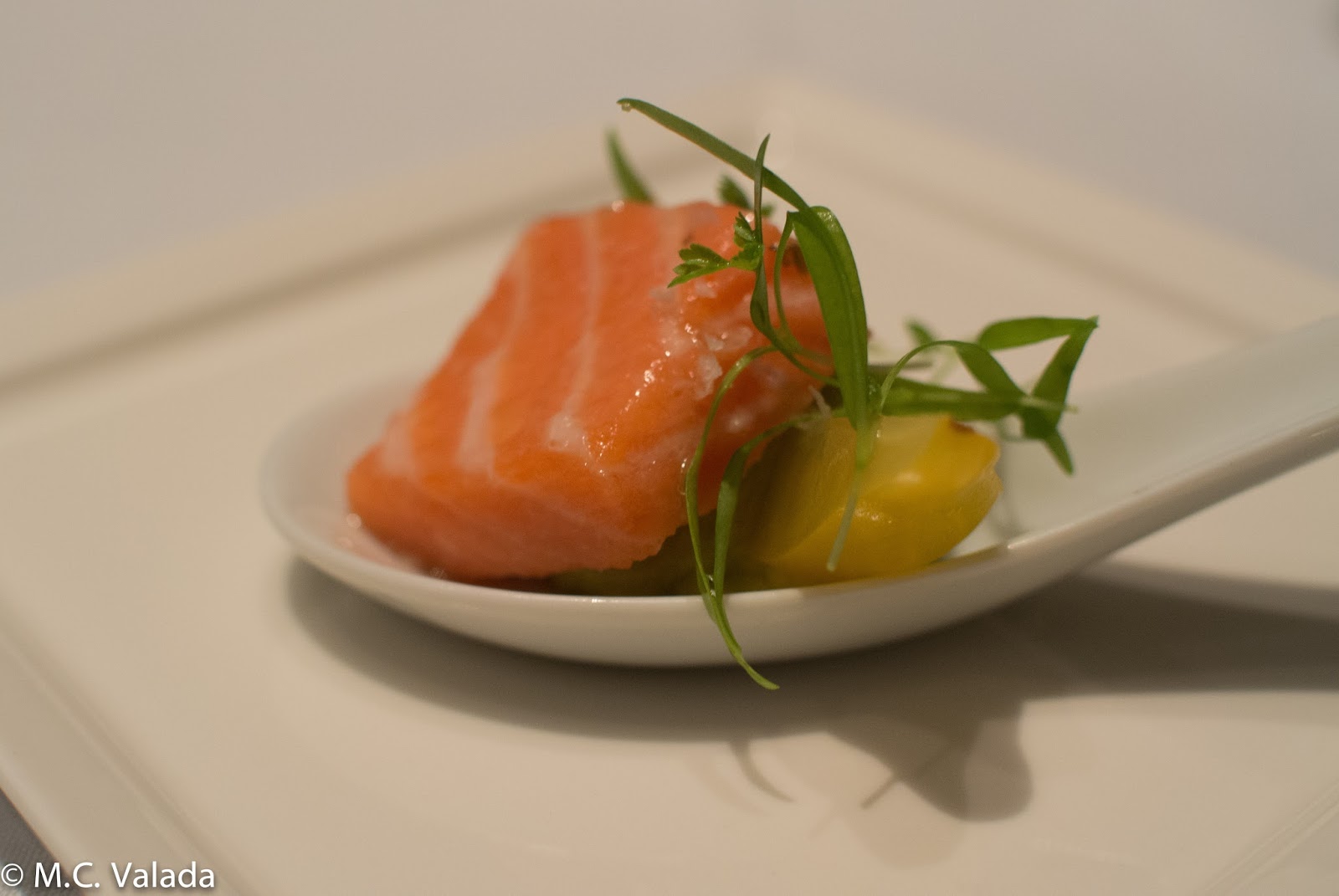 An amuse bouche of salmon with taragon at the hotel restaurant. 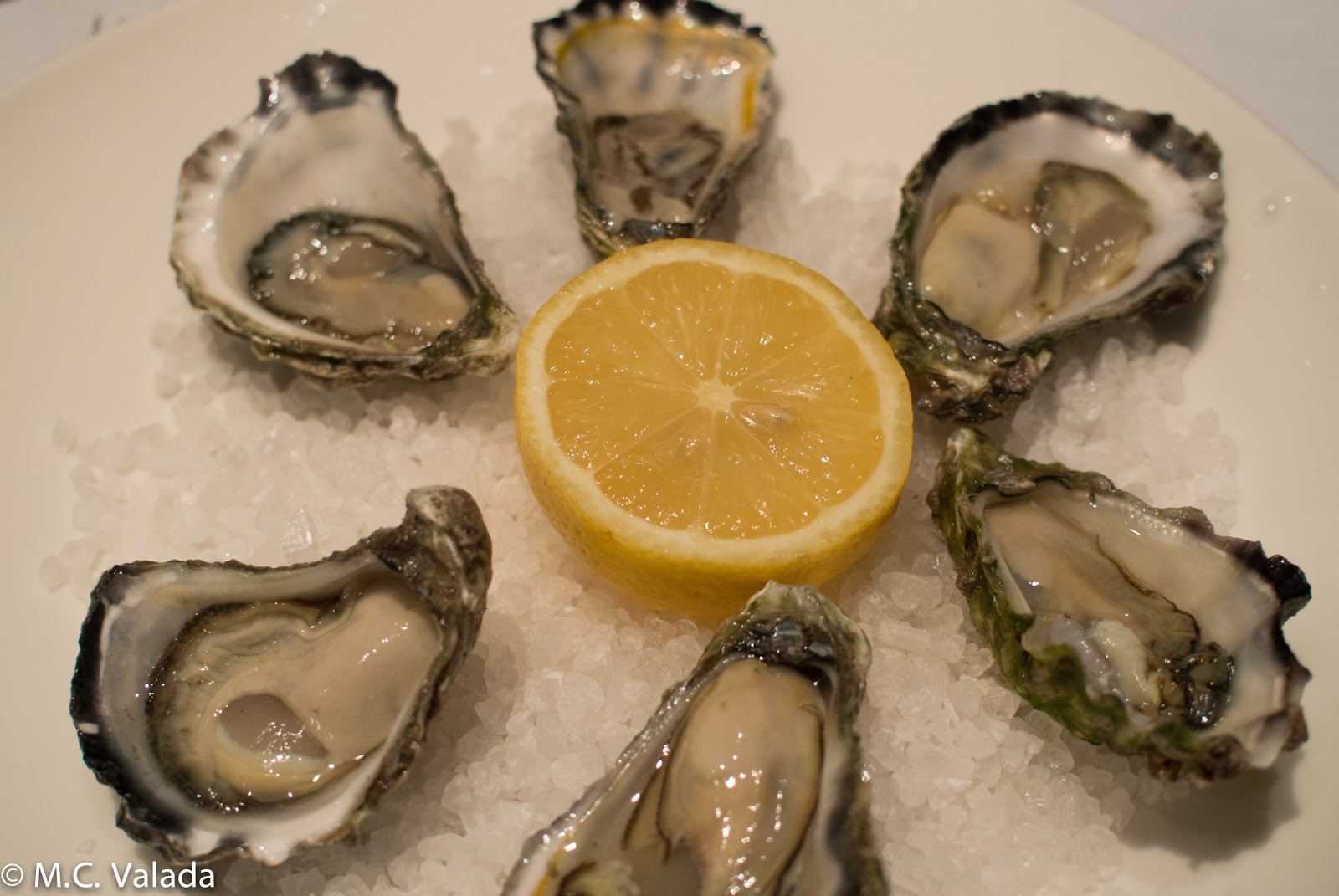 I ate oysters every chance I got. They were local and they were delicious. And that's how I got a sea shell to bring back to my friend Sharon Baker at work.

Len ordered the charcuterie and onion soup because he didn't think he was very hungry. I did help him finish the platter, which was very pretty and really good. 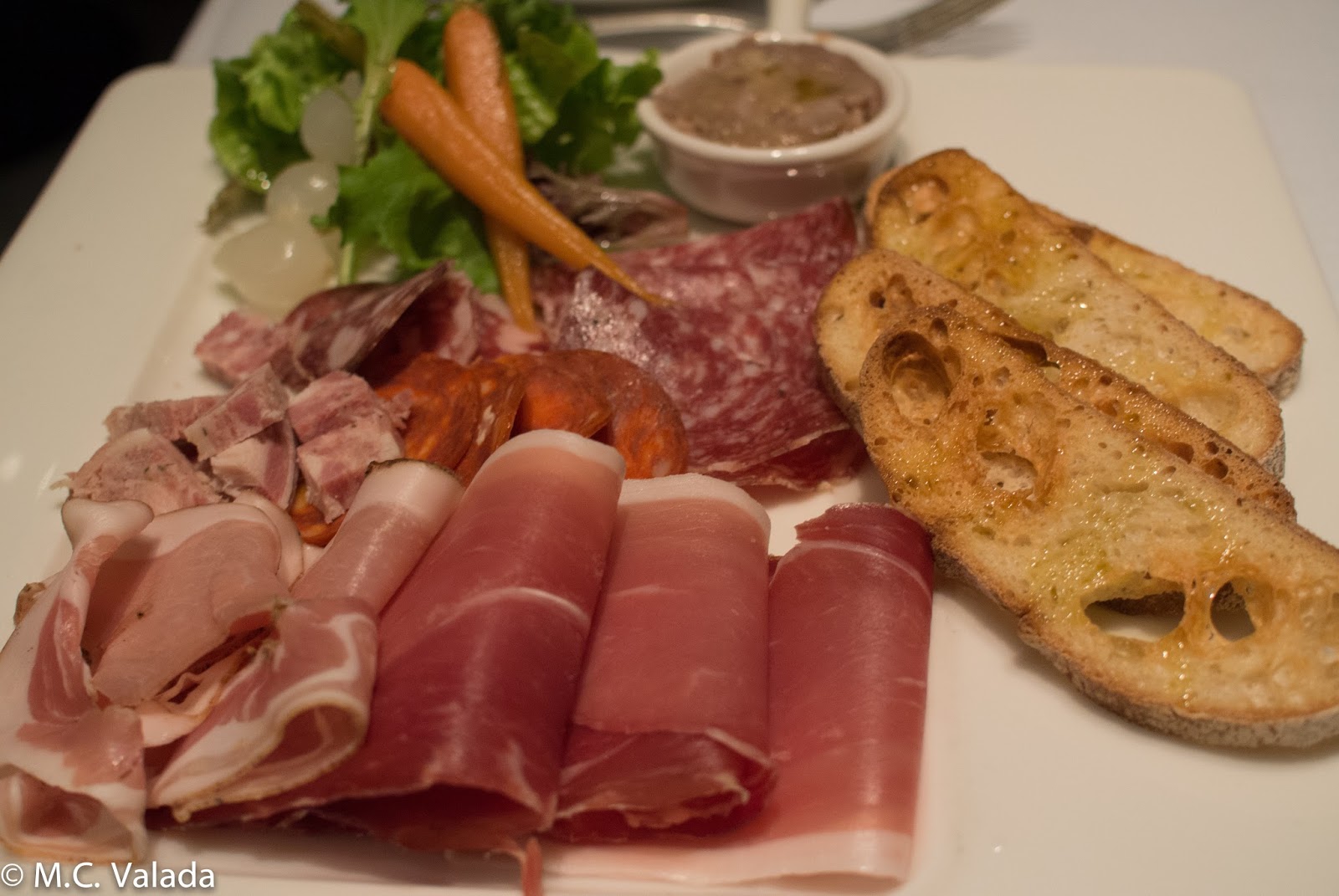 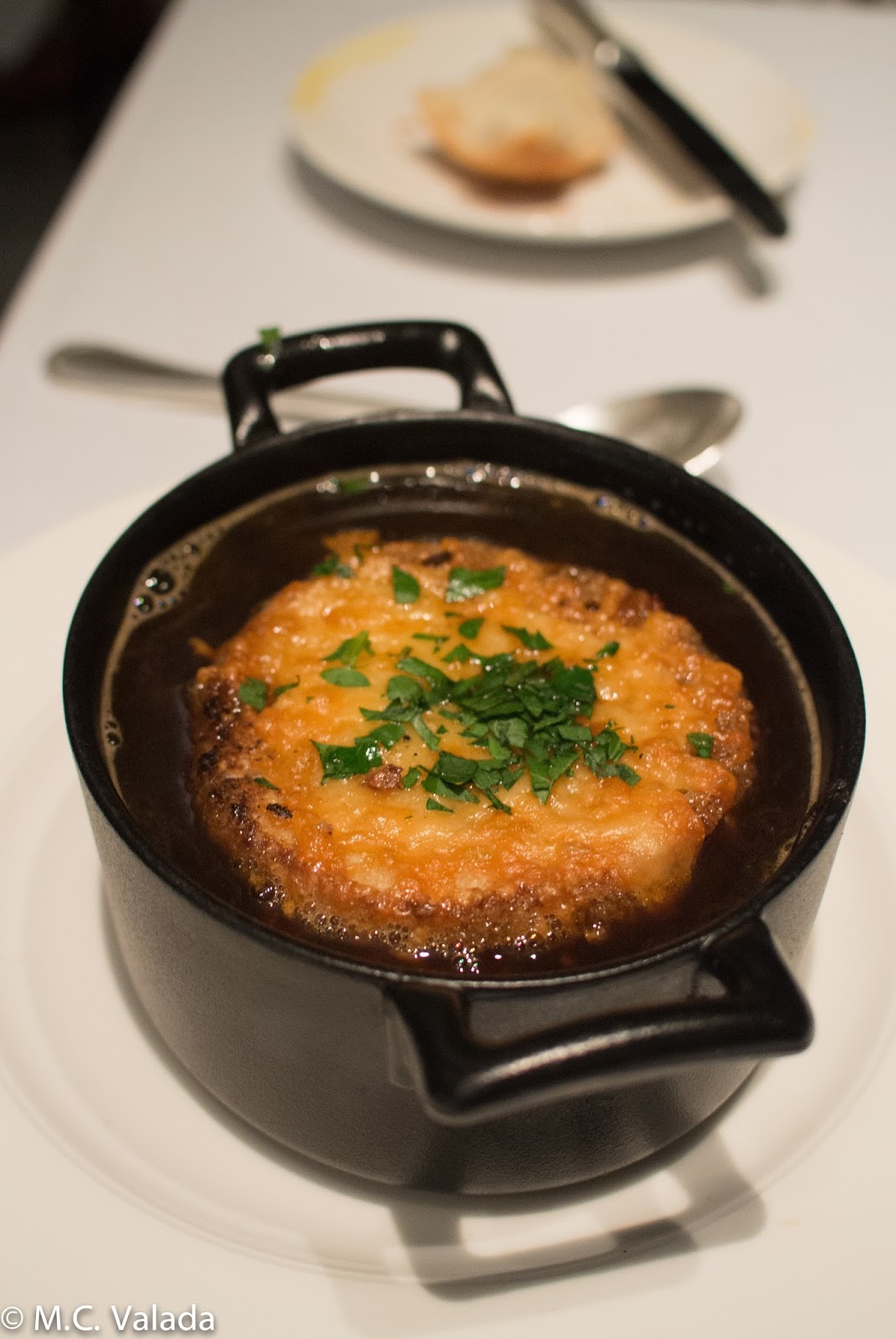 I seem to eat a lot of duck when I eat out, probably because it's one of those things that Len refuses to eat and it is more effort than I will put into cooking for myself. 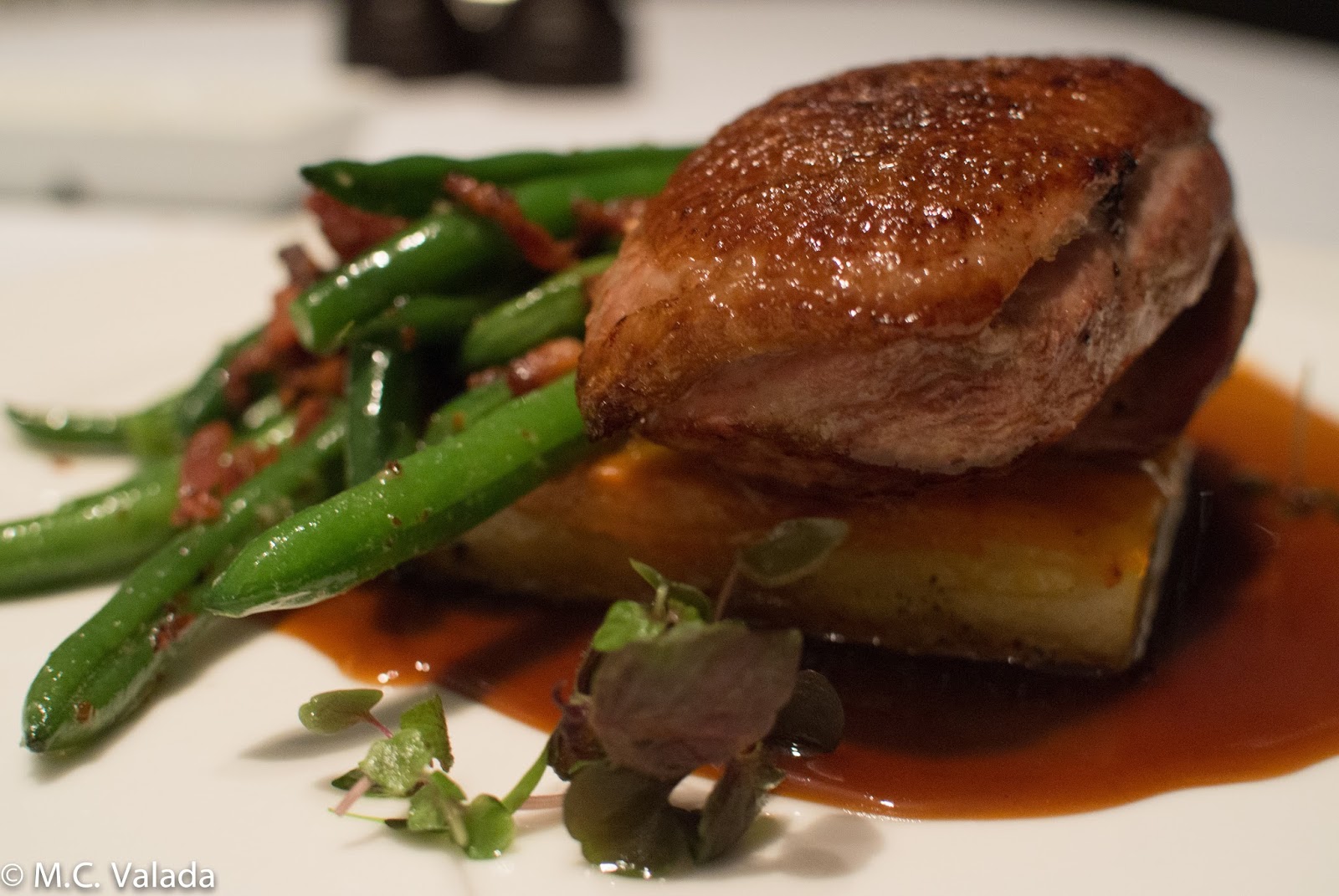 This duck breast was cooked perfectly, with a wine-reduction sauce, haricot vert, and potatoes. I'm pretty sure I staggered back to our room after dinner.

I ate a lot of fish while I was in Australia, some which I had never eaten. John Dory was one I wanted to try, since Gordon Ramsey constantly has his chefs make it. Turns out that it is a white fish, not that different from some we have here, but very popular in Australia.

I did contemplate trying kangaroo, despite my general ban on red meat in my life. Unfortunately, the only place I saw it on a menu was as carpaccio, which I decided would not necessarily be a good start. So no 'roo this time.

We found a really good Chinese place near our hotel, where we ate after our excursion to the Blue Mountains. The plan had been to eat at a favorite restaurant of my friends' out there, but Len suddenly didn't feel well, so we went back to Sydney. The prices at the Chinese restaurant were higher than we'd expect to pay here, but the dishes were quite good and the staff attentive. Since we were in the financial district, it was very quiet on a weekday night.

I never did get to a proper tea, but my friend Sharyn and I stopped for some morning refreshment at a shop in this big Victorian building, filled with all kinds of interesting small shops. The scones were different from those I've eaten before. Tender, rather than flaky or dry. I picked up a small cookbook with tea recipes (books are also expensive) at the Museum of Sydney, so I hope a recipe in that replicates Australian scones.

Coffee was an experience. The Aussies take their coffee very seriously. Hugh Jackman is so serious about it that he opened a coffee shop in New York. I'm still not sure what a "flat white" is, because my drink of choice was chai, but poor Len could not get a coffee shop to produce a drink they way he likes it here. It was pretty funny. Coffee prices were remarkably similar to here, by the way. Starbucks is failing miserably over there, again because Aussies take their coffee seriously and they don't like "Charbucks."
Posted by M. C. Valada at 11:01 AM

M. C. Valada
I'm a professional photographer, a recovering attorney, an adjunct instructor of photography at a local community college and a four-time Jeopardy! Champion (Season 26.) Much of my spare time is spent learning to ride horses, an activity denied to me when I was a child. I love to cook and entertain and I am a passionate reader. I am married to an "old god" of the comic book world, writer Len Wein. He's the one who created Swamp Thing (with artist Berni Wrightson), the Human Target (with Carmine Infantino), Wolverine (with artists John Romita and Herb Trimpe), and Colossus, Storm, and Nightcrawler (with the late, great Dave Cockrum.)