Lunch with the Barefoot Contessa

I took a number of cooking classes at Sur la Table when a friend of mine, trained as a pastry chef, was in charge of the program at the Farmer's Market in Los Angeles. Vanessa and I were talking about cookbooks at one of them, possibly because I was complaining about incomplete recipes in some books. She told me that Ina Garten's recipes always work, and that has certainly been my experience in the years since I started cooking from her books. 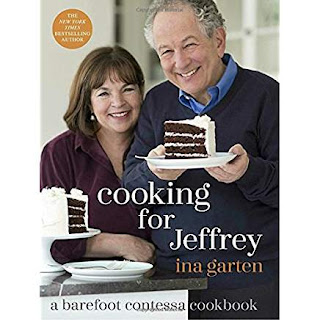 We voted to use Cooking for Jeffrey as our book for this month's Cook Book Book Club. As someone cleverly pointed out on Facebook, "let's face it, all of her books are about cooking for Jeffrey." It was the first experience some of our members have had using Ina's books, but it was wildly successful. Even people who borrowed the book from the library, expressed their intentions to purchase it after having a chance to taste all the food.

The table was set with Aynsley's Cottage Garden china and Gorham's Etruscan flatware. Table cloth and napkins were from Lenox. The cobalt glassware is from Libbey. It does not pay to have expensive glassware in earthquake country.

We had three lovely appetizers, starting with Smoked Salmon Pizzas made by Nan Cohen, who came in second at the Jeopardy! Teachers' Tournament last week. She arrived at the house with the raised dough ready to be shaped and cooked in my oven and timed to come out when most people arrived at 1 o'clock. Wonderful.

Another dish assembled in my kitchen was the Butternut Squash and Ricotta Bruschetta made by Michelle Resnick. 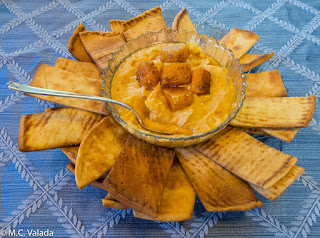 Then Sharon Baker showed up with the Butternut Squash Hummus and pita chips. Like my friend Gillian Horvath, Sharon likes making hummus with different ingredients. Someone pointed out the recurring ingredients in the book by mentioning the butternut squash. Truly, who could object to a new selection of recipes for butternut squash.

The next course was our soup course. I made the Asparagus and Fennel soup, which started by making Ina's Chicken Stock the day before. I also used the chicken stock recipe as the basis for a vegetable stock, so I could make another batch of the asparagus and fennel without meat. Instead of chicken, I threw the stalks from the fennel bulbs I would be using in the final soup, to give some more flavor to the vegetable stock. Both versions were well received.

I confess, I love making soup just to be able to use my double-handled cream soup bowls, soup tureen, and soup ladle. Everything looks so pretty.

The pasta course featured Ina's Roasted Italian Meatballs made by Karen Bailey. Inspired by the photograph of Rao's marinara sauce in the book, Karen went to the Los Angeles location of Rao's Restaurant to buy sauce to use. I do not eat beef, but everyone who does pronounced these meatballs which combine beef, pork, and veal as light and excellent. (My mother's recipe uses a combination of meats including venison, when available.) Everyone was also impressed by the flavor layer added by the Chianti in the wet ingredients for the meat balls. Karen had originally planned to make the Creamy Parmesan Polenta, but her experimentation made her decide spaghetti was the better choice in terms of flavor and textures. I was thrilled that Karen was finally in town and able to join us for a meeting and I look forward to seeing her at our next one.

My mother fries her meatballs, as many people do. I turned to oven-roasting mine years ago, mostly because it is tidier and less time-consuming than frying is. There's no better way for making meatballs for a crowd (or freezing) than the oven-roasted method.

We had neither fish nor poultry courses this time, but we had two additional meat entrees, along with some tasty side dishes.

Julia Roberts made the Lentil and Kielbasa Salad, which had a nice, fresh taste and went well with the meat dishes. I don't usually think of lentils as a salad ingredient.

We were treated to yellow squash and cherry tomatoes from Laurie Perry's garden, in addition to  zucchini from the morning's farmer's market, in Laurie's rendition of Parmesan Roasted Zucchini garnished with cherry tomatoes.

My sister, T Valada-Viars, made Spaghetti Squash with Garlic and Parmesan as another side dish. She roasted the squash earlier in the day at the home for which she is house sitting, and then brought the shredded spaghetti squash to be finished on top of the stove in my kitchen just before lunch started.

The Tuscan Roasted Potatoes and Lemon that Liz Mortensen made were a good accompaniment to the meat dishes. We definitely tasted the lemon, and rosemary, garlic, and olive oil are a great way to season potatoes. I do wonder how these would taste if preserved lemons were used instead of fresh.

Ina's recipe for Cider-Roasted Pork Tenderloins is served with a roasted plum chutney. Unfortunately, it isn't plum season and Catherine Fleming had to replace the chutney with a plum butter. It worked quite well. This recipe is amazing, and fast--it cooks in less than half an hour in a hot oven--so long as you remember to put the pork in the marinade 8-24 hours ahead of time. I made the recipe several weeks ago and t is what I consider to be one of the real keepers from this cook book. Eventually, plums will be available, and one of us will make the plum chutney recipe.

Kim Gottlieb-Walker arrived with enough Brisket with Onions & Leeks to feed all fourteen of us and her family later that night. It smelled wonderful, but I have to rely on other people to tell me how good it tasted, since I don't eat beef, but everyone was happy. Kim said she would probably serve it with mashed potatoes at home. I suspect it with show up at several Jewish holiday dinners in the coming year.
We had three desserts to sample. Susan Avallone, our happy baker, made the Vanilla Cream Cheese Pound Cake. She claimed it almost as soon as we chose the book, beating Sharon Baker to the recipe.

Sharon, however, decided to make the Bourbon Honey Cake as a last-minute submission in addition to her hummus. Sharon makes an excellent Eggnog with bourbon, so she couldn't resist this recipe, in spite of the almonds which decorate it (and which she can't eat.) It has a number of spices in it, and is a good recipe to keep in mind for the Jewish High Holidays in the fall.

The final dessert offering was the Frozen Hot Chocolate inspired by the restaurant Serendipity 3 in New York, because like Ina and Jeffrey, Laura Brennan and her then beau (now husband) had the dessert at that restaurant when she was in college (at Yale, where Ina's husband Jeffrey taught for many years.) Over lunch, Laura talked about how she had accepted the invitation to the cook book book club because she felt she really didn't know much about cooking. She's not only improved her skills, but her son is learning his way around the kitchen and now is responsible for one meal a week for the family. That's a very good result, I think.

Dessert was so popular that it was proposed we do a Dessert First meeting sometime down the line. My sister insists we wait until after she gets back from her summer job in New York.


We are now considering books and dates for our next meeting. Besides the dessert themed meeting, Appetizers Only was suggested as another theme (because how can there be too many appetiers), and books on the list include Alton Brown's latest book, The Joy of Cooking, and a Korean comic book with recipes. We expect to have another fine time.
Posted by M. C. Valada at 9:38 PM

M. C. Valada
I'm a professional photographer, a recovering attorney, an adjunct instructor of photography at a local community college and a four-time Jeopardy! Champion (Season 26.) Much of my spare time is spent learning to ride horses, an activity denied to me when I was a child. I love to cook and entertain and I am a passionate reader. I am married to an "old god" of the comic book world, writer Len Wein. He's the one who created Swamp Thing (with artist Berni Wrightson), the Human Target (with Carmine Infantino), Wolverine (with artists John Romita and Herb Trimpe), and Colossus, Storm, and Nightcrawler (with the late, great Dave Cockrum.)